Ever wanted to go to a covered market in 1973? Um, well you can, even if you don't want to because this is the subject of my latest batch of photographs. Upon acquiring them I thought 'Why would anyone actually take these?', but after my recent holiday to Valencia I found myself photographing all sorts of shops and new buildings so I answered my own question : a 1973 version of myself.

But enough. These two had 'Coventry' written on the back of them so I'll start here. 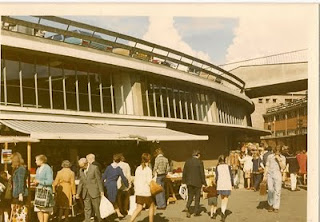 It's warm enough to leave your coat at home, but the gentleman in the foreground has decided to go fully buttoned up - matching suit and tie, even when buying the groceries. No sign of standards slipping there, although I wonder what's on the mind of the be-dungaree'd chap on the right? Robin Askwith or Robin Nedwell? I'll leave that to you. The rotunda caught my eye first, but then I was drawn to the various pieces of British cast-iron peeping through the railings on the roof. I can indentify a TR6, P6 Rover and some sort of Ford estate, lest we forget that once we made and designed things. Any idea about the rest? 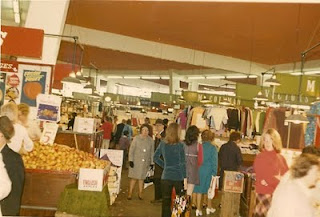 The camera is not a passive observer here - it has startled the middle-aged couple in the centre and caused the centre-parted young lady on the right to pretend to look at the fruit and veg stall in order to capture her best side. Things I like; the terracotta ceiling, the uniformity of hanging signage and the presence of the young lady in the blue velour jacket. She's in the first picture too -

Is the photographer's girlfriend tagging along, checking out the bargains whilst he pursues his obsessions with covered markets, or is he doing something else - maybe following someone? I leave you to decide. There will be more Covered Markets of Olde England later. Be seeing you!
Posted by Between Channels at 07:37