Grandparents of the Eighties

Hello! Aren't you growing up fast? Make yourself comfy. Is he allowed a drink, Keith? Today we're visiting our grandparents at between channels. These pictures were in a hoard I recently purchased. The others in the series were of various non-descript garden scenes, but these two caught my attention straight away because this is an actual view of a real grandma's house in the eighties. Take your shoes off when you get into the kitchen. 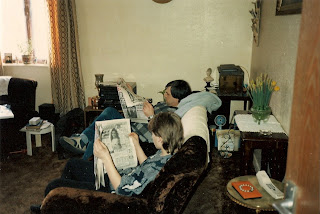 Dad and lad have sat down to read The Sun. The haircuts match, but that's where it ends - whereas Dad has cunningly angled the paper to hide what he is looking at, son is checking out an Annabelle Croft-alike on the facing page. There isn't a hint of sideburn between them, as befits the decade. Although there's no sign of a dog, we do have a tank of those swollen-eyed goldfish that fascinate grandchildren so much. Don't bang on the glass.

Other things to note; the phone with one of those little phone number holder things next to it (from the days when we wrote down a phone number ONCE, and then that was it), a letter rack nailed to the wall, a sizeable antimacassar on the velour sofa and the obligatory grandparent accessory, an ashtray. 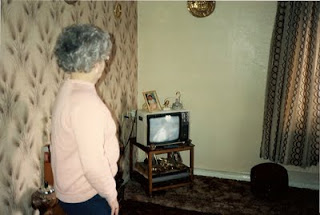 Here she is! And I have to say that the photographer has crept up on their subjects twice, because Gran isn't aware of the presence of the camera - she's more intent on watching Spurs on the telly! This Maysles Brothers-like unobtrusiveness lets us have a good look around. Brass things on the wall, and what looks like a video with a wig on. This is some serious kit - my parents didn't have a video for years and when we did get one I'd get told off for rewinding for too long 'Because it will wear out'. There's either a packet of cards or a packet of cigs on the gas fire, although looking directly down from there gives us a clue as to what's in the box.

One last thing before I give you a mason's handshake that conceals a pound coin - look at the photographs. On the windowsill, above and beneath the telly ... that's real love that is. There are more covered markets, shopping centres and bits and bobs to come, but I have to confess that there wasn't just one set of grandparent photographs ...
Posted by Between Channels at 07:42