Grandparents of the Eighties Part Two

We've been to one set of grandparents, now lets visit the others. If they offer you any sweets, don't eat them. I'm not cleaning the car up for your sakes. But we'll talk about cars later. 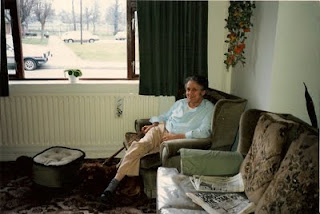 And here we are! Grandad, and he's a hard character to pin down, what with the twinkly smile and old-Ted hairstyle. Part of me pictures a career in the Merchant Marine and a whole afternoon of risque stories about Sierra Leone and posh officers, but I'm also getting a double dose of John le Mesurier a bit down on his luck, holding court in the front room of his new council bungalow. Anyway, things aren't so bad - there's always Sherry, sat there faithfully, and a footrest to take the weight off while reading the papers.

But let's look around again. You're not telling me there isn't a Grandma right? This isn't one of those aesthetic Grandads with a Daschund and a lavender scent packet on the radiator. Plus, he's sat in Grandma's chair (check out the Grandad-proofing on the cushion and the antimacassar.) But what sort of Grandad sits on the settee? Agh! This is proving to be a stressful visit. 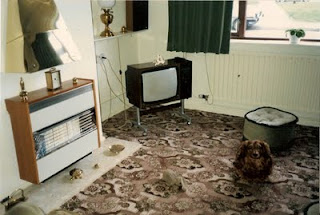 What's the reason behind this picture? Perhaps they were trying to capture the rather globular daschund doing a trick, although it could be one of those photographs people used to take in case they were burgled, to show the insurance man they had a telly. Anyway, here we are and I'm liking the brass hood over the fire and the turtles underneath. The decor is quite larky at first glance; lethally spiky conch on the telly, a little brass beer bump handle, a brass counter bell that goes DING when you strike it - but then have another look around. Anything missing? What have Granny and Grandpa Le Mes done with all those school portraits you sent them? Yes that's it, they must be in the other room. The one we're not allowed in. 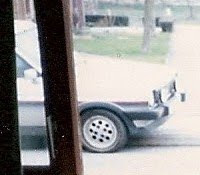 Time to go home, and it shouldn't take too long because isn't that a Fiesta XR2 parked outside? You're the greatest, Dad, although it isn't too far beyond the imagination to picture Grandad Le Mesurier screeching up to Fine Fare to get some evening drinkies. Anyway, it's been really rather lovely to see you, thanks for dropping by.
Posted by Between Channels at 08:26