Morning! This is quite exciting for me because the pictures posted here have been sent by between channels' first ever contributor. Take a bow Sean Hancock, who sent me this motherlode of pictures depicting the rise and dear decline of the Friar's Square shopping complex in Aylesbury.

An example of early sixties 'brutalist' design, Friars Square was used by Stanley Kubrick for some of the location shooting on 'A Clockwork Orange'. It's not there anymore, at least not in the form shown in the photographs here. There seems to be a peculiar undercurrent of dread running through the place - the local duck breed was originally wiped out by 'duck fever' in the nineteenth century (although it sounds a bit like a David Essex album title) and in the seventies a pamphlet called 'What's Happening to Aylesbury?' was produced, which detailed tales of unemployment and bored youth causing mayhem on the streets and concrete underpasses. I think we'll be right at home here, then... 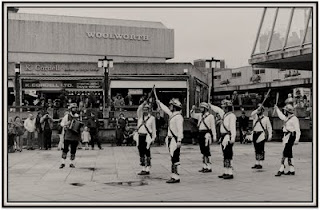 This ticks all the right boxes for this website, I think. 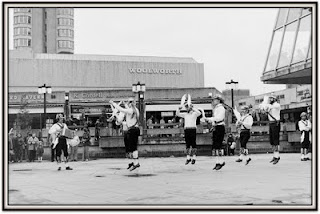 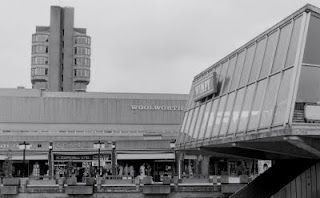 The biggest Woolies in the country. 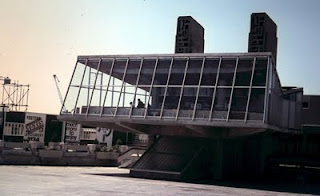 How's this for a central feature? A damn great wedgy, glass-fronted cafeteria horned by two retro-futurist Mayan towers. Note how dark and dingy the surrounding area is, even in bright sunlight. 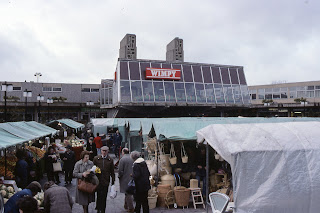 A market AND a sixties brutalist shopping precinct? Marvellous. All told, it looks a bit - well, bleak, bringing to mind post-war Dresden. At least the 'cafeteria' has gone and turned itself into a Wimpy. It'll be a burger eaten with a knife and fork first, and then down to the square where a young John Peel will sell you a wicker shopping basket on wheels from the shadows. 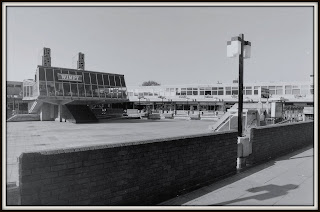 Pretty impressive, nice and clean - nothing can make this square look cluttered and untidy. 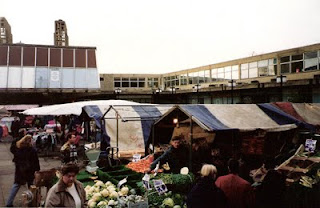 Ah. Looking a little more weathered a few years down the line, the market is in full swing. Lots of sprouts on offer - quite a few market stalls mark their prices up in that font even now. Any idea what it's called? I'll start us off with 'Brussels New'. 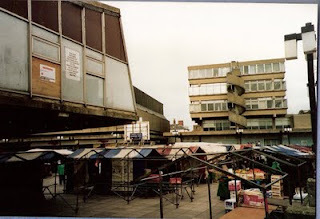 The Wimpey bar has been condemned and moved to redevelop are afoot. The spiral fire escape is rather lovely, like the inside of a whelk shell. There's a similar one atop Sheffield's Castle Market, next to the winding gear for the lift. I tried to go up it and then had to retreat quickly. God knows what the vertigo-suffering office workers of Aylesbury would have done in a fire. 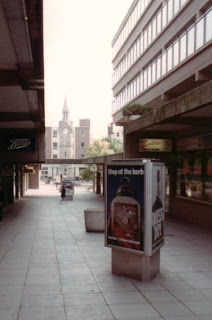 Zodiac Toys in the background, when there were still toy shops in shopping precincts. Note the street furniture; prismic advertising posts and those deep concrete planters, nominally flower beds but actually a handy place to store soaked cigarette ends and crushed cans of lager. 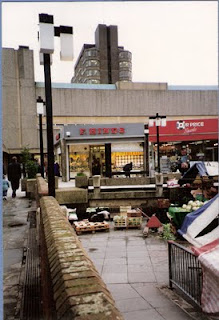 Our Price, a chain much derided in its declining years, but try finding a record shop nowadays (HMV aside). To be fair most of the chain record shops all sold the same stuff, and when you did find that Jesus Lizard cassette you really wanted, it was £18.99. The only exception I found was the HMV down The Moor in Sheffield, which stocked an incredibly large amount of krautrock. You'd see people's mums flicking through the racks and looking at albums by Grobschnitt and Embryo in bewildement. So to conclude, Our Price was rubbish, good riddance. 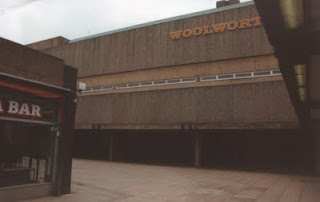 More Aylesbury images to come. Don't have nightmares.
Posted by Between Channels at 03:45