Welcome back to the between channels Aylesbury extravaganza at Friars Square shopping precinct, courtesy of Sean Hancock. More pics of the place in various states of decay as well as a couple of examples of local colour. Lets press on. 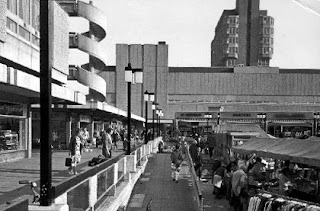 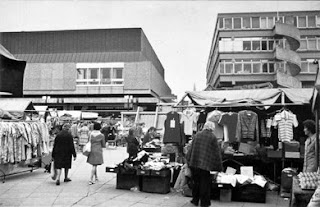 Garments galore at the market, although judging by the heavy attire of the punters I reckon it's a little early for short sleeves (to be fair they are old ladies and as we've seen before on this site, old ladies tend to wear overcoats in all seasons). 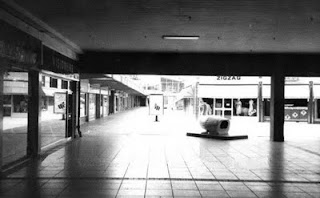 Could be a photograph from an old Cabaret Voltaire album cover. Businesses that wouldn't do very well these days Number One: Visionhire. 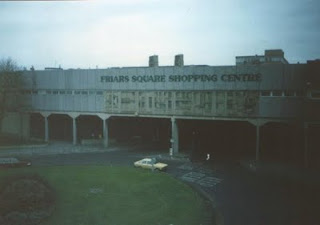 Peering through the Instamatic murk we have the Friars Square facade. It has some nice municipal sculpture-y bits underneath the lettering, but apart from that it's as cold and unyielding as a former Soviet remand centre. I like old photographs taken on overcast days. They seem to say 'Remember - the past was also this.' 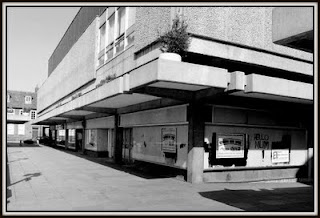 Looks like things are slowing up a little - when the big shops start to shut you know you've got problems. Some japes from the blokes who were whitewashing the windows and also note the large quantity of weeds roosting in the concrete planters. Really sets the place off don't you think? 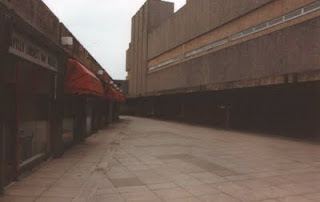 Cheer up, it could be worse. It might NOT be a unisex hairdressers. Where would you get it cut then, eh? 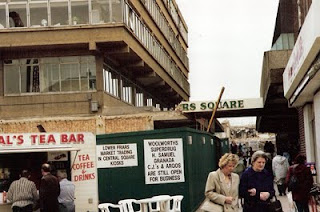 The strain is etched onto the faces of these people as the siege of Leningrad dragged on for another month. Things are still ticking over, despite the utter devastation that has been wrought in the background. It's interesting to see how the phased demolition has spared some parts (presumably the less sepulchural and profitable ones) and bashed the rest down whilst the shoppers go about their business. Tea, Coffee? No thanks pal, I'll have a drink. 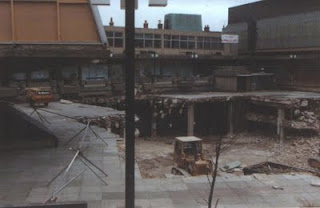 A modern re-imagining of 'Quatermass and the Pit'. The old market square is gone, but at least they've left the Wimpy bar with its bold, raked windows and decorative flanking towers. 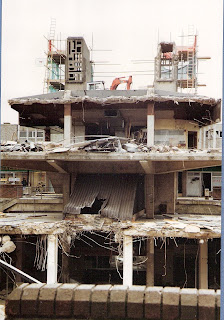 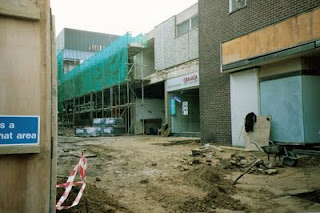 More mayhem and dismemberment as the demolition teams move in. Not even Granada was saved. 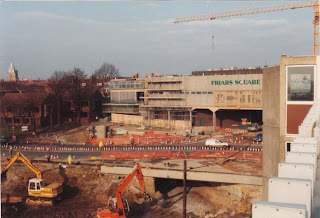 A pigeons-eye view of the redevelopment. Note how Friars Square stands out from the rest of Aylesbury - those rendered and pebble-dashed concrete slabs are in stark contrast to the rest of the town huddled to the right of the picture. The Wimpy and Granada are no more. But I won't leave you with sad memories.. 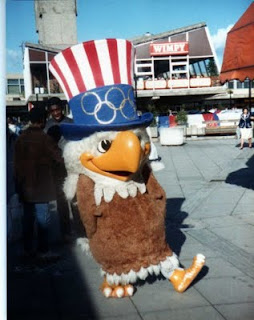 The Olympics have come to town! Well, not your town because they're in Los Angeles but they've sent out an envoy. I've never seen an Olympic mascot sent out as PR before - I wonder what London will be sending for 2012 (insert bit of politics here)? This American Eagle is definitely making himself at home, swaggering round outside Wimpy. I like the synchronicity of the large white patch on the ground behind the 'bird', as if it has just made a man-sized excretion at the feet of the two unimpressed looking young men standing adjacent. 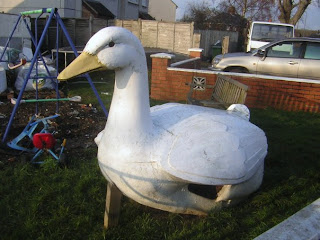 Milton Keynes has its cows ... and that's about it, but Aylesbury had its ducks. I say had, this one seems to have survived destruction, propped up as it is in somebodys garden. What would you do with it when you moved house? And seriously, if Aylesbury had any sort of civic pride, surely it would want to reclaim its concrete duck for a nominal free? As an aside, this picture is a companion to the 'Seventies Recreation' post, featuring as it does one of the most badly sited children's swings in Christendom. Yeah, put it next to the hardcore on the pallet. Next to the duck. On top of the remains of the industrial waste we burned. That's it.

That is also it for Aylesbury. I've enjoyed posting these pictures as they really give a flavour of a long-gone sixties precinct. I may never visit Aylesbury in the future but I can say with certainty that I have visited its past. Until next time...
Posted by Between Channels at 05:09