So here it is - Merry Christmas! Everybody in these pictures is guaranteed to be having fun. But they can't look to the future now. Something something about it's only just begun.

I don't know where these places are. The photographs have no identifying text on the back, and have been sourced from various sets. They do have one thing in common though - they all encapsulate the festive joy that is the Christmas period. 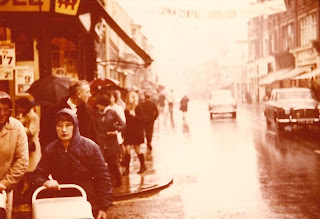 Muffled against the cold and driving rain, she presses gamely on, the pram cutting through the puddles like the bow of a destroyer on the Arctic convoys. Her quilted anorak is soaked through, and her heel is sore after the inattentive gentleman behind her trod on it. The shops don't have what she wants and little Frank is crying somewhere beneath the transparent plastic cover on the pram. If only his father were here. Then again he'd probably be craning round to look at that dolly bird in the black boots' legs. Trollop. The only comfort she has is that this moment of ordinary misery will never be captured for the world to see. That would be awful. 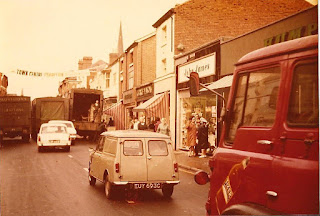 The problem with modern towns is traffic. High streets that were laid out before the age of the motor car just can't cope with modern traffic volumes. That wasn't the case in the old days. Oh no. Take a look at this - all the Tizer lorry has to do to progress up the street is drive round the Mini van, slalom past the Austin 1100 and the other thing, and then pass through the generous gaps left by the three lorries entirely blocking the road. Piece of piss, or indeed, Tizer. They're probably all going to the Town Centre Exhibition. Yay. Two things of note; it's a shame that you don't get shops called 'Hump' anymore and secondly, the photographer took this picture whilst attached to the bonnet of a P6 Rover, having absent mindedly wandered into the road. 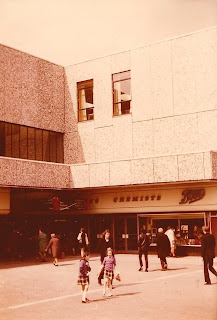 The twins liked nothing better than a day out at the precinct. All day they'd just hang about, looking at all the half-masts. 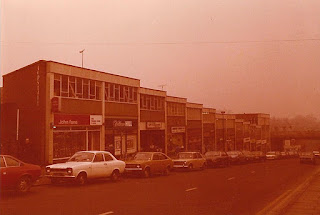 If you want to get your Christmas shopping done, there's always the arcade just down the road. It's nice, honest. You could place a bet for your loved one (William Hill hasn't had to spend its profits re-designing its shop fronts) or go to John Fane and get, well, whatever John Fane sells. John Fane, incidentally, was the tenth earl of Westmoreland so perhaps it sells grouse or ermines or something. The area is also, for the Christmas period only, suffused in a poisonous brown mist. 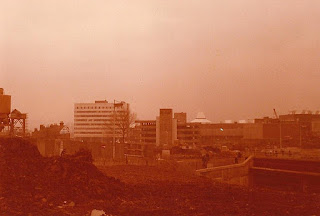 Terraforming on Mars was not easy. 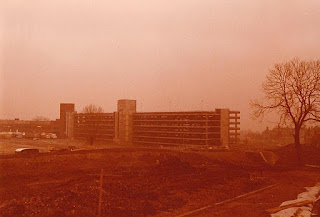 A lot of the colonists got a bit depressed.

Feel free to print any of these images out to send as Christmas cards. Though only for work colleagues, not friends or family. If I don't post anything before, have a very Merry Christmas and don't go back in time to any of the places shown above.
Posted by Between Channels at 19:47