Hullo! Hope you all had a nice Christmas. Well forget about it now, back to the brutal misery of January and what better way to ease us into 2012 than a look at The Dickens Press' 'I-Spy' series. I'd like to get a look at some of the others; 'On the Pavement' sounds particularly riveting (or stomach-churning) while 'In Hospital' could be particularly poignant (or stomach-churning). Anyway, you know how it works - see the person (or pavement detritus) and simply add up the points. Let's go! 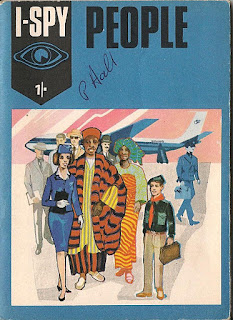 OK let's see. From the cover I spy Buster Keaton and Peters from Peters & Lee behind the stewardess, and the looming, cloaked figure of death loitering by the aircraft's tail. 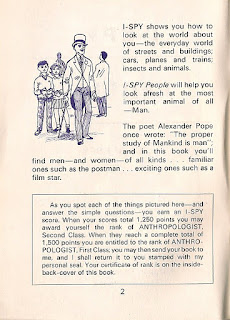 Just look at that toff! Look at that swell! Ten points! I like the quote from Pope, and the slightly dispiriting news that you need a grand and a halfs-worth of points to become an 'Anthropologist First Class'. That's like, 150 toffs! It'll take me years! 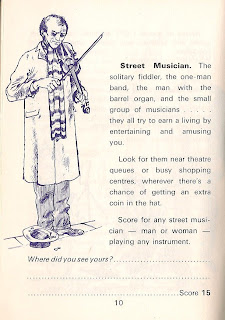 Where did you see yours? In my dreams, in a deserted seventies shopping arcade underpass, slowly lowering his fiddle as I pass him before starting to walk behind me with a sure-footedness that belies his disability... 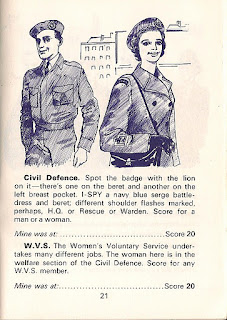 "What's the Civil Defence man for, Mummy?"
"Hush now darling, and let me take you to the matinee - you haven't seen 'The War Game' yet have you?" 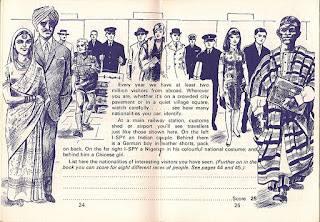 Yeah, just look at them. Watch them carefully. Just watch them. And when you've seen them, just let me know. Alright? Good lad. 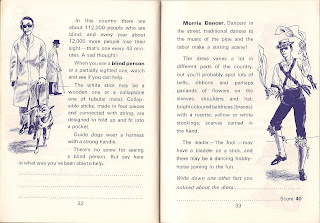 Score for a blind person - nothing. Score for a Morris dancer - forty. That's more than the toff! 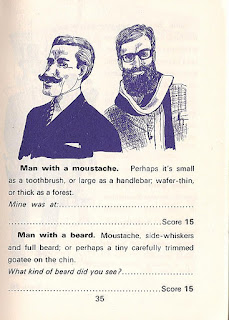 I may well have found my new headed notepaper design. Thick as a forest! Fifteen points! 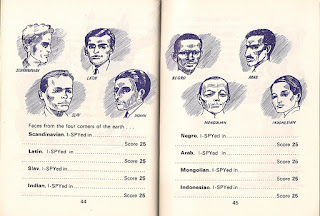 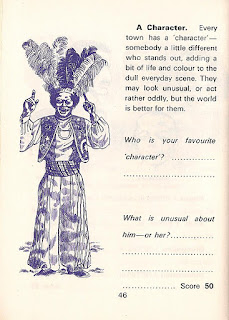 That's nice. It's a good message to send to children - the world is better for difference. In fact it should be celebrated, and it's all the better that this message is disseminated to the young. For it is they who hold the key to the future. 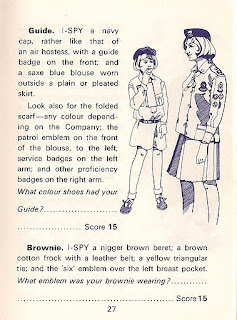 Aw. I feel good now. Let's see who else we can spot. Look, there's a Guide with her saxe blue blouse and pleated skirt. And there's a Brownie, with her ni... Jesus.

Well there we are. Who won? All of us, as that word is not used as an adjective anymore. Let me know if you get 1500 points: I'll send you the address to write off to. I'm going onto a popular auction site to look for 'I-Spy On the Pavement'. Be seeing you!
Posted by Between Channels at 15:53