I'm kind of obsessed by this place. Here are some photographs taken in Sheffield Castle Market, a modernist shopping centre built to replace the old 'rag and tag' open market from 1960 to 65. Owen Hatherley has written about it far more eloquently than I can, but I will say that although Sheffield Council has tried its best to get the place dynamited over the last 10 years, it is far more used and useful to the ordinary people than the dull, middlebrow (and mostly empty) new developments that have sprung up in the last few years. Apparently one of the inspirations for Cumbernauld, Castle Market is now chipped and unkempt but always busy, serving the people of Sheffield who have neither the money or inclination to visit Meadowhall.

There are three floors of stalls including a fresh food market and various cafes (including the Rooftop, which has wonderful sixties furniture and more importantly, very good bacon sandwiches). The whole place is built on the site of Sheffield Castle, which exists in stump form somewhere in the basement. Before you form any Stone Tape-y ideas about the powerful influence of old ruins on the present, you should know that access to the castle comes via a peeling wooden door round the back of the loading bay with a large sign that reads 'Sheffield Castle Ruins' pinned above it. 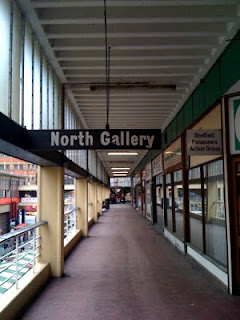 The view from the upper gallery. The gallery on the other side is now permanently sealed off, although the old shop fronts are still visible. 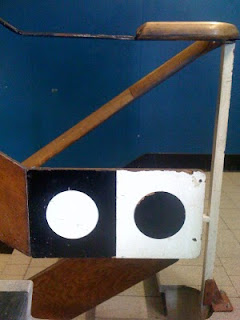 The cheerful original detailing on the bannisters only remains on the uppermost floor leading down from the upper gallery. 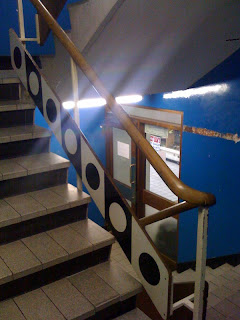 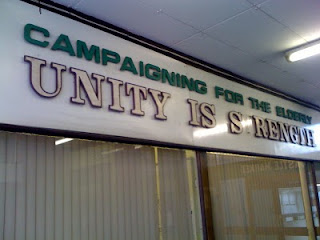 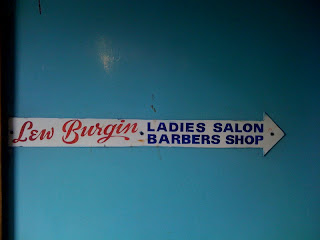 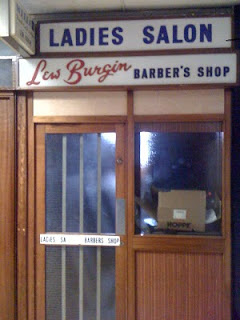 Lew Burgin's is actually still open, though they seem to have forgotten to take their old shop signs with them, and no-one has bothered to remove them.

All the old fixtures and fittings remain upstairs, although some of them weren't installed particularly well in the first place. 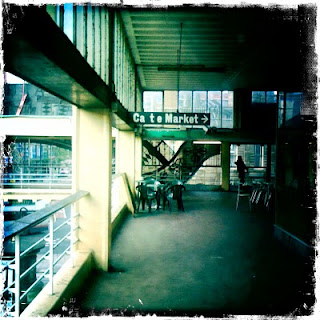 Near this sign is the old mini-market, now known as the 'Collectors Fair', which is a glass-walled room of old varnished wood booths containing only one trader; Roy Jenkinson's Stamp Shop. Roy knows pretty much everything about Sheffield and sells old postcards of the area as well; his stuff seems to have organically spread throughout one half of the room. I asked him what happened to the other traders. "They left a couple of years ago. A woman from downstairs came and told them that the rent was going up so they all cleared off at once." He scratched his head. "That was in 1985." Time seems to have stood still for Roy in that room. I would have taken a couple of pictures but I think that might have been a bit rude. Maybe next time. 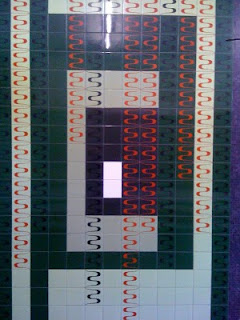 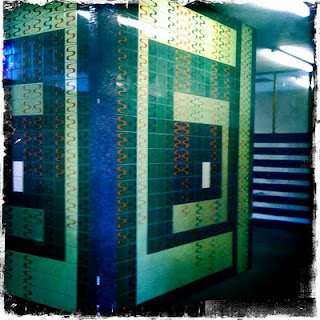 These tiles can be found at the end of the arcade behind the still-functioning hairdressers. 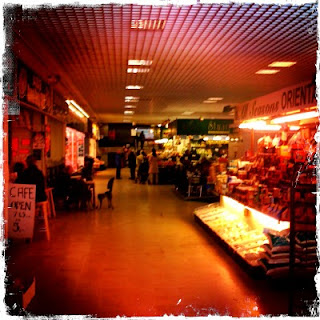 This is the Fresh Food Market. The Lucifer lens on the Hipstamatic doesn't capture the clean, eighties feel of the place, so I think I may return for another try. 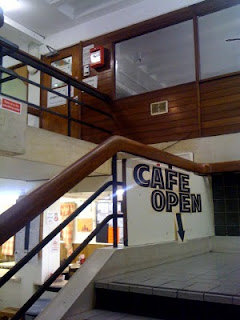 This gives you an idea of the multi-levelled, labyrinthine nature of the market. Although it's most certainly a modernist building, it has been made with a feel for community and closeness - it lets people mill about, browse and stumble on things that they may want to buy. In other words, it's a space that is made for ordinary people. 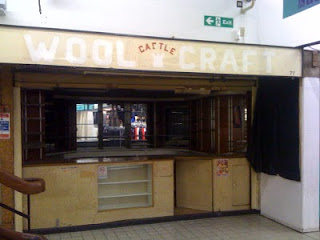 Castle Woolcraft just sits open and empty, its counter gathering dust. I think it's just for people to lean on if the cafe opposite gets full. It reminds me of the shop from an old cinema foyet, although Poppets were not in evidence. 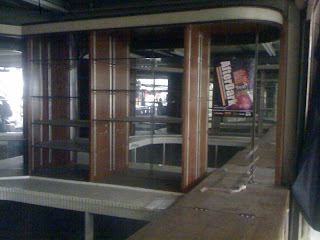 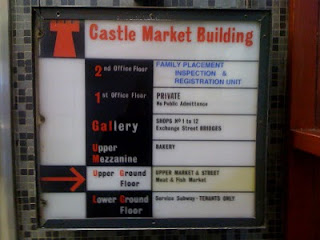 This is the Market Guide outside the old lift. An man from the building contractor working in another part of the market told me I was looking at the wrong sign. "The new ones are through there. We need to get rid of this old one because everybody still looks at it." I can't think of a worse reason for getting rid of an old sign (although moving it to the working lift would be a good idea). 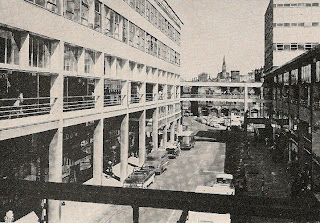 The view from the Upper Gallery when the Market first opened in the sixties. 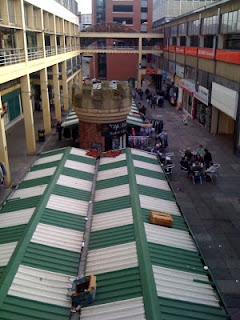 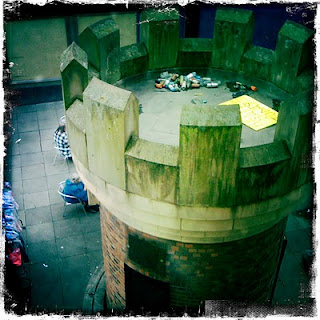 This turret was added after the through road was pedestrianised. Bottles and cans huddle for warmth at the top. 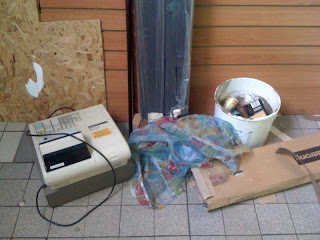 It's easy to be sentimental about things in decline. Castle Market is not glamorous and by no means perfect - mention the name and many locals' faces will give a little involuntary grimace - but it isn't the building's fault. The whole area has been allowed to run down with the expectation that it would be replaced by a new 'Financial District', but the recession has put paid to that. Post-Meadowhall, Sheffield city centre will never be the same again, but if the Castle Market area goes, we will have lost another modernist building, planned and built in an age when councils employed architects to build things for the good of the community. I intend to keep going, and you are all welcome to join me for a pot of tea and a bacon sarnie in the Rooftop Cafe.
Posted by Between Channels at 06:54