A brief stopover with C.E. Fudge at the new shopping centre in London's mysteriously named district, and first impressions are not good. Still unfinished when these two pics were taken, C.E. reckons it's the most unsuccessful precinct s/he has visited. The rememedy? "..coloured handrails as in Milan's underground station." I think it would take a bit more than that, though the place seems to have a bit of attitude about it, more Burgess than Ballard. 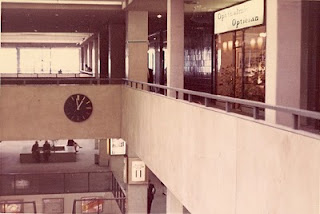 Dingy, hard-edged and roughly-finished, it makes me pine for Stevenage and Wembley - you can just picture the youths craning over the balconies and delivering long silkworm trails of spit onto the shoulders of innocent shoppers below. 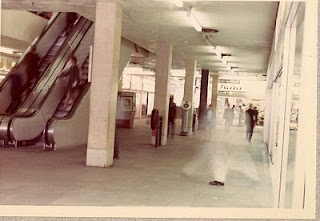 Who is this droog clowning for the camera? One-legged dervish aside, this is pretty bleak stuff again : the E&C looks more like a converted multi-storey carpark than a shopping precinct. It is definitely more 'outside' than 'inside', and you can imagine some of the old ultraviolence taking place behind the photo-me booth. Look at the hospital ceiling-style striplights, and remember that this edifice was still under construction!

We'll be going somewhere a little closer to (my) home next time. See you there...
Posted by Between Channels at 05:22