The Exhaustive Guide to the BBC Handbook #3

A little Telstar-like polygon comes hurtling through space towards us out of the darkness, twinkling little points of writing as it flies. There we go - education (still important), drama, current affairs, sport, religion, news, entertainment and music. Everything billed equally in the same sized font. There's no massive picture of 'Christmas Night With The Stars' here. No credit though. Six out of ten.

Now here we have a lovely set of vintage screen-shaped panels with a child of the sixties peeping through. The geometric arrangement is very good so I'll bet a professional did that. And they did - Alex Kroll, art director and editor who worked with Lee Miller at Vogue. Best one yet for me, really representative of its era so a big eight out of ten. 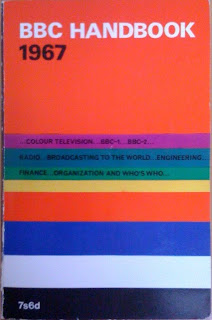 A bit of a retrograde step design-wise, but we do get an explanation:

'The colours of the strips on the cover represent the primaries used in colour television and their complementaries.' Five out of ten. Will things get any better? 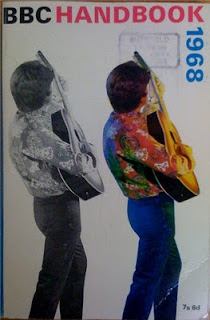 This wandering psychedelic minstrel will tell you his ten tales and then go on his way, and the presence of his monochromatic brother will additionally tell you that colour TV has been inaugrated by the BBC. Sadly, no designer attributed. I think it looks like one of the 'King Midas In Reverse'-era Hollies and while the hipsters down at UFO might have sneered at the clothes, it at least shows the BBC tuning into popular culture for the cover of their handbooks. A mighty seven out of ten. As psychedelia turns to hard rock, what will we have on the cover of the 1969 handbook? John Bonham setting up his Ludwigs with a brown ale in his hand? 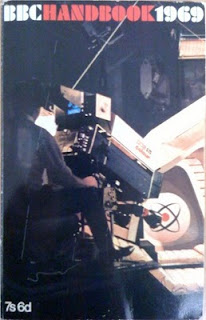 It's not. It's an unattributed snap of an early colour camera (type, anyone?) filming something in the studio. And it looks exciting - that little atomium badge and the odd planes and panelling. Could it be a lost snap from the set of 'Year of the Sex Olympics'?. Maybe not, but just as the filigree of psychedelia hardened into rock and roll, so the paisley-wearing troubador has been replaced by a 'behind the scenes' cover picture. I really would like to know what set that is, though (although it'll probably be something by Charlie Drake). Marks out of ten? Seven! That's it for the sixties, I'll bet the seventies has something amazing waiting for us...
Posted by Between Channels at 06:58