J.G. Ballard and the JAE

The covers of the Journal of Automotive Engineering were meant to be perfunctory - broadly illustrating the thrust of the main story. Here we are though, nearly forty years later, and they have acquired a whole new potency and meaning, creating a new series of associations that transcend their original utilitarian intentions. I look at the first three and think J.G. Ballard; 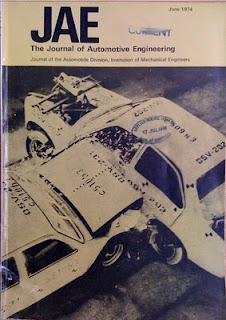 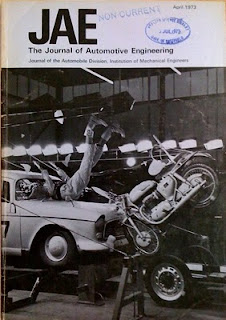 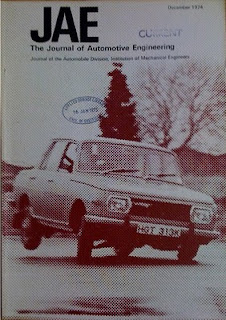 Cars scream into view and crash: no doubt there's an injured doctor involved somewhere. The next one shows us what could be a strange landscape, teleprinted out and ready to be examined. Not by machines though, by a man using one of those folding portable magnifiers, the old and new rubbing along together: 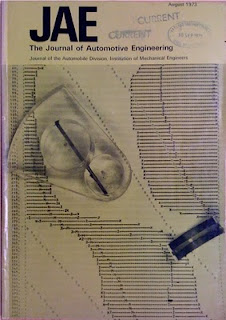 The last one, shown below, could be the cover of a cheap Sci-Fi magazine - 'Weird Tales of Finchley'? - and looks inexplicable. Maybe it's a screenshot from a long-wiped ATV telefantasy series. 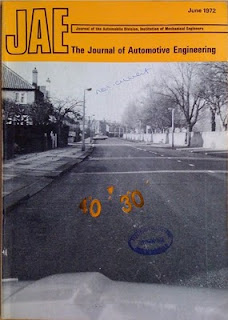 Numbers floating in an open road - a compass reference? A hallucination caused by road vibrations (that could be Ballard again)? When an image loses its context it loses its meaning - the numbers are meant to be a new kind of speedometer that is projected by laser onto the windscreen, but it's impossible to tell just by looking. As an aside, I'm glad it didn't catch on. You can imagine all those pre-crumple zone Ford Corsairs and Farinas slewing all over the road as their drivers squint at the revolving numbers in front of them.

The covers of the JAE were meant to have a small amount of decorative value by way of introducing the text within. Now I think they have gained something over time as their original purpose has become obsolescent and the technology they were promoting long gone.
Posted by Between Channels at 17:59