The Merrion Centre - Exit to the Future

The Merrion Centre in Leeds opened in 1964 and has long been a place of hauntological interest to me. It contains the sine qua non for hauntological retail areas, the abandoned cinema. The first floor doors opposite Morrisons are still there and some kind soul has cleared a space in the whitewash so you can see in. All the seats and equipment have been removed but the paintwork and fittings still remain. There are some pictures of the Odeon in its current state here but what is so intriguing about an old cinema in a shopping centre? There's the faded glamour - childhood memories of Saturday matinees now locked up behind plywood walls and cashpoints, and also the very feeling of decline that pervades the Merrion. I worked for the Citizens Advice Bureau in Merrion House for a while and it was one of the oddest locations for an office ever. A trip down the lift would deposit you in the upper shopping area, clad with mirrors, white tiles and reflective metal. This was in the pre-smoking ban days so people would wander up the stairs and sit near the empty shop fronts and smoke vacantly whilst security guards patrolled the walkways sniffing for cannabis. The guards are a little more proactive now. After taking this picture: 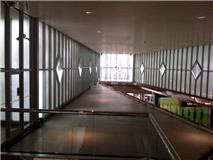 a guard requested that I curtail my amateur photography, as it wasn't allowed. There isn't really anything there anymore - perhaps they thought I was peddling illicit and unofficial advice to distressed citizens. I withdrew down the stairs to where the supermarket was. The area near the Morrisons supermarket was great, with some of Bruce Lacey's very 60s automatons in a big display case and lots of red and yellow glass above the shop front. This kind person recorded it one Christmas here. Sadly this exuberant decoration has gone, replaced by the standard industrial-looking facade. Why bother? It was old and weird and cheerful - the whole centres aging design makes it stand out from the Saint John's Centre and The Light. This constant updating, upgrading and blanding out is making our shopping streets dull and identical. I'm not saying that we should put up with broken windows and rust weeping from concrete walls. But we do need variety, and a few reminders of our recent past as an everyday marker, otherwise we will just continue to erase all the charm and distinct detail from our environment. I guess that's where the hauntological references come in - the Merrion Centre is a faint reminder of our everyday past, which is slowly but surely disappearing.

On a less anguished note, I found the following video on youtube, and aside from the music it really nails the feeling of oddness and timewarping that you got from the old Merrion, and also shows early 60s planners' fondness for rats nest stairways and sunken outside areas.

What else? There were the two outdoor escalators at the rear of the centre that began to slowly decay in a carpet of dead leaves and plastic bags. There's the sloped entrance on Merrion Street which is as treacherous as the North face of the Eiger when so much as a teardrop falls on it. There was the Georgian Arcade, which resembled the temporary bierkeller at a city-centre German Christmas market. And the cinema. Still intact, with its velour drapery and memories of Lyons maid and usherette trays, it can't be long before the space is gutted and transformed into something less magical, less abandoned. Take the chance to have a look and when you're withdrawing money from the cashpoints inside the centre, just remember that behind them is a set of glass doors and a dark, abandoned ticket office; other people's happy memories just lurking at the periphery of the present.
Posted by Between Channels at 06:10